by Evil Dick & the Banned Members 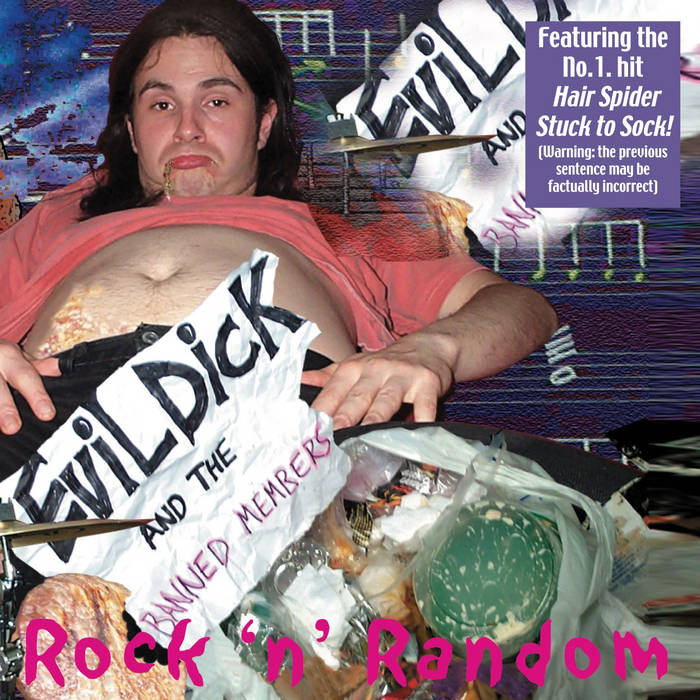 This lo-fi album from the noughties sums up the compositional direction Evil headed in during his years as a music researcher.

From the liner notes: "This super CD, of which you are now in possession, marks the beginning of a quite extraordinary development in the work of Evil Dick. Since June 2001, Evil has been rehearsing with his group, the hilariously titled, Banned Members."

Rock 'n' Random - Ben Watson, The Wire (#225)
"Since being interviewed in The Wire (#179) in 1999, Richard Hemmings – aka Evil Dick – has been holed up in academia in Leicester, pursuing a PhD on ‘randomness’ as a tool in statistical calculations and contemporary music. His label and website have been active in the meantime, this being the ninth release since his debut Coprophagism (FMR CD60) attracted attention for its deft nailing of clichés rampant in pop and dance. Those virtual assaults on regressive listening are now being perpetrated for real in pubs and clubs, which explains the ‘and the Banned Members’: Gimp Wilkinson (guitar), Skip Undo (drums) and Mistress Vwaargh (scissors).
Using actual musicians has made Evil Dick’s music more clunky, but also more 3D and forceful. He retains his original ambition to make music that can compete in garishness and vitality with anything on pop radio. His Banned Members recordings have been streamed through his software, denatured and spiffed-up. ‘Sensitive Dick’ is a ‘detuned love song’ which lists all the Beatles hooks used by Oasis, reduces them to ridiculous rubble, and then uses the mess to construct a piece of ‘computer enhanced free improvisation’ (Evil Dick’s sleevenotes are so knowing, he leaves any reviewer trailing behind).
‘Coloured Dots II’ uses a system of colour codes to force his musicians to pick ‘random’ pitches whilst structuring the rhythm and achieving a certain amount of recognisable melody. The result is highly original, as if the aleatoric strategies of the current Braxton Quartet are being pushed through bright, modern, radio-friendly sonorities. If anything, the avoidance of ‘art’ tone (a malaise which has become an epidemic among Braxton’s disciples) gives the music greater virulence and vibe. ‘Hair Spider Stuck to Sock’ is a seven-minute masterpiece, squashing Viennese tenderness against a bad boogie with a directness no-one has managed since Manchester’s Dogbiz gave up his reel-to-reel for a street existence.
The so-called avantgarde turns sickly when it becomes specialised, content with its role as ‘art’, and omits to imagine the monstrous totality it’s meant to be protesting. Evil’s collision of pop sounds and genuinely-researched avant procedures is the correct medicine for such niche-market cosiness. Just to show that he knows what he’s up to, there’s a short episode where, live on Radio One, Evil takes on a Virgin A&R employee about the structural limitations of today’s chartbound songs. The track is called ‘Fuckwits In The Biz’ and is followed by ‘Our Instruments Are Broken’, a ‘ghastly free improv on the verge of sonic torture, dedicated to boring people everywhere’. Evil Dick’s jangling, sonorous, driving, appealing, wonderfully ‘wrong’ music is such a balm to a musical psyche battered and compartmentalised by the British class system, you want it programmed back-to-back on all commercial radio stations NOW.

Composer Evil Dick is a violent, abusive control freak. He is psychotic, given to totally contradicting himself. He is self- obsessed, which is not surprising because he is also incredibly dull (anyone heard his "coloured
dots" monologue?). He is prone to bouts of extreme grumpiness, especially in bed, when any kind of sound, including his own breathing sends him into a rage. ... more

Bandcamp Daily  your guide to the world of Bandcamp